Two very visible things struck me as indicative of why the show was packed with enthusiastic exhibitors and attendees. One was the use of Beam remote-presence robots on the exhibition floor. Palo Alto start-up Suitable Technologies brought two dozen Beam robots to the show and rented them by the hour to people calling in from around the world. They worked flawlessly, moved freely and accident-free, carried on conversations with passersby and exhibitors – a perfect solution for those who couldn’t physically come and experience the trade show portion of RoboBusiness. There was even a Beam Hour where the show floor was closed to all except exhibitors and Beam attendees. A high-tech solution to broaden the high-tech audience of RoboBusiness.

The other was Unbounded Robotics and their new UBR-1 one-armed mobile robot. Built by many of the same team that built Willow Garage’s two-armed robot PR2 – a robot that launched and sold for $400,000 in 2009, the new $35,000 UBR-1 is as capable as the older PR2 but it is now affordable whereas very few could pay for the PR2. This price drop phenomena was talked about by speakers and in private conversations. Words like “plug and play,” “convergence” and “confluence” were used to describe it.” “In just five years — from $400,000 to $35,000! Amazing.”

The UBR-1 appears to have encapsulated for all to see a major trend happening in robotics over the last five years: sensors, cameras, batteries and other component costs have been and continue to drop dramatically and, combined with mobility and ever-more-powerful CPUs, those lower costs are enabling cheaper more capable robots — such as Unbounded’s UBR-1.

With 2D and 3D sensors, scanners and cameras, more capable lighter and smaller batteries, and all the other functionality developed and incorporated in ROS and the PR2, Unbounded Robotics will begin shipping UBR-1 units next summer. First units will go to academia but shortly thereafter commercial versions will begin shipping to companies for various mobility tasks such as machine tending and material transport. After that, Melonee Wise, CEO, suggested additional application areas being developed for the hospitality business – mobility tasks like room service delivery and after-room-cleaning inspection. Other applications could include restocking shelves and, with the proper software, limited eldercare. The new UBRs will be manufactured and assembled in Silicon Valley. Unbounded is in the process of closing their “A” round of funding.

“Invest, Innovate, Implement” was the theme for RoboBusiness 2013 and it was carried throughout with extensive speakers, panels and workshops. Funding methods and understanding what VCs think and want were a big part of the show. It started with a 3-hour workshop sponsored by Grishin Robotics, the start-up funding entity of the Russian VC Dmitry Grishin. It was followed by an evening session where a group of start-ups presented their elevator pitches in front of four venture capitalists. There was also a breakout session with VCs discussing today’s investment trends and how they view them in relation to investing.

As costs come down and component systems become more capable, many companies are moving to add advanced vision and perception systems, path and grasp planning, and networking capabilities to their existing robots. One way to accomplish this is by having a ROS-Industrial front end – a common open-source language familiar to most engineering and robotics students – where one can design and simulate cross-platform vision systems and other additions before implementing them. ROS-Industrial, a non-profit open source robotics operating system organization, provides a common framework for robotics applications and is proving to be a good resource for rapid development of new components and uses for existing robots.

Google’s Chris Urmson, Director, Self-Driving Cars, a keynote speaker, showed not only the history but the complexity of the process of robotic self-driving cars. There’s a whole lot going on as a Google car moves along it’s path. 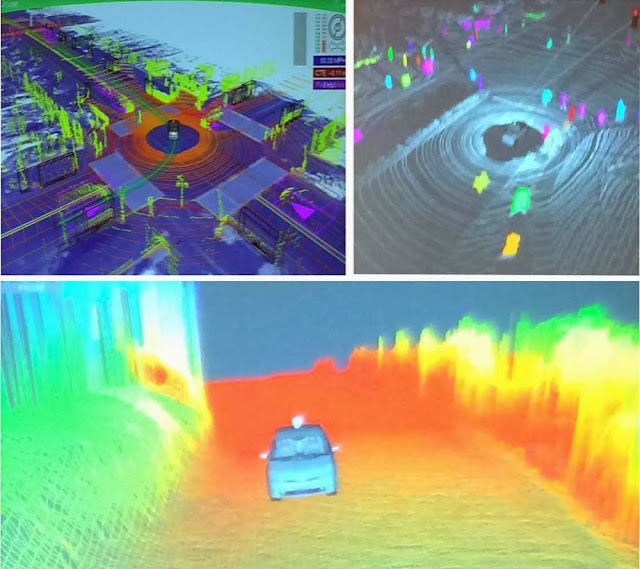 Notice the red circle in the left top picture. With 360º vision provided by the scanner, the car has to process every type of information, everywhere, including behind and around corners. In the top right picture, there are lights, pedestrians, lane markings, etc., all identified and color coded and tracked by the onboard computers. When maps are available, comparisons to what the car is seeing versus what the map says is there is another input to the massive data processing – 1 GB of data every second – that occurs thousands of times every second.

RoboBusiness 2013 had over 500 attendees and 60 exhibitors. Next year’s show will be held in Boston.