On Sunday, Charlie Rose from CBS News 60 Minutes, interviewed Jeff Bezos about what is next for Amazon, the world’s largest online retailer with more than 225 million customers.

Volume can reach 300 items a second on special sales days and that volume feeds the activities at 96 Amazon warehouse/distribution centers around the world. Amazon’s goal is to sell everything to everyone and their warehousing and shipping methods have been of constant interest because of their success at being able to deliver as promised. For robotics-interested people, Amazon acquired Kiva Systems and their robotic shelf-to-picker system for $750 million two years ago. Interestingly, in this 60 Minutes interview, no mention was made of Kiva or that method of pick and pack. [Why was that?]

“The secret is we are on our 7th generation of fulfillment centers – and we’ve gotten better every time,” Bezos said during the interview. An example of this type of improvement is that Amazon can now store twice as many goods in its centers as it did 5 years ago.

A portion of the 60 Minutes piece was about Amazon and its web services group AWS. Little known facts emerged from this part of the interview: AWS hosts Netflix and the CIA as well as providing the cloud for itself and other big enterprises and governmental institutions.

Bezos’ straight talk was evident throughout. Consider this example:

Charlie Rose: A lot of small book publishers and other smaller companies worry that the power of Amazon gives them no chance.

In an Overtime piece one can also see the genius in Bezos when he described the process of moving so many goods through the system – including the new PrimeAir: “It’s a symphony of people, a symphony of software and … a symphony of robots.”

Amazon has a not-so-secret lab in Silicon Valley, Lab 126. Charlie Rose pressed Bezos for any big surprises that might be forthcoming and Bezos showed him their new concept delivery system using an octocopter. The robot aircraft could haul a package of up to 5 pounds (approximately 86% of Amazon’s sales fit this category) and autonomously deliver it within a 10-mile radius from the fulfillment center. Branded as Amazon PrimeAir, a video showing how it works has already been viewed by over 9.5 million youTube viewers. 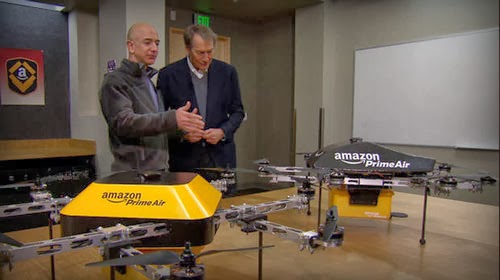 Media of all types had a field day with the 60 Minutes broadcast and the video of Amazon PrimeAir in action. Amongst the most prominent of the naysayers was CNN Money who didn’t see the bigger, long-term picture Bezos is planning for: “The world isn’t ready for Amazon drones. Besides being illegal, the sensor technology to avoid collisions isn’t there yet.”

Certainly the best one-liner came from a Tweet from a reporter at Bezos’ own Washington Post: “So basically free stuff from Amazon if you’re a good shot with a rifle.”

Most seemed to miss the point that concept cars, planes and… octocopters are needed ideas awaiting technologies to fill in the gaps which will turn the concept into economic reality and a feasible product.

Amongst the more informed, Michael Toscano, President of AUVSI, commented:

While Amazon demonstrated that deliveries via UAS are technically feasible, the commercial use of UAS is currently prohibited in the United States. The FAA, however, is currently working to establish rules for commercial use. Even Amazon has acknowledged the regulatory framework needs to be in place before it can launch its service, and this is going to take until at least 2015.

Like many other companies and industries, Amazon is testing UAS now so that it can be ready to recognize the benefits of the technology once UAS are fully integrated into the U.S. airspace in the coming years.

The wider use of UAS will have a huge economic impact in the U.S. for both the public and commercial sectors. Our economic study released earlier this year found that the UAS industry will have an $82 billion economic impact and create more than 100,000 jobs in the first decade after integration.

Certainly there will be many technological, insurance and regulatory hurdles before we see a fleet of Amazon PrimeAir, or FedEx Today, or even Papa John Pizza Express. With the endorsement of Jeff Bezos, the tip of the iceberg has been reached and it’s all downhill from there. His optimistic viewpoint is that we’ll see Amazon PrimeAir in four to five years.