by After the Flood, Eunike Nugroho and Lloyd Shepherd
09 January 2017 What might the first western explorer have thought upon encountering whales, flamingos and iguanas? What would have they thought of these strange near-fantastical creatures?

What is it like for 21st-century people to encounter robots for the first time? Are they friend or foe? Where do they come from and what controls them? If we saw one for the first time tomorrow, what would we tell our friends?

This is the thinking behind Robot Life Survey – an alternative history series from design company After the flood that visualises Boston Dynamic’s Big Dog, Prox Dynamics’ Black Hornet Nano, and Harvard University’s Kilobot Swarm as if witnessed by an early explorer. What is our relationship with these strange, futuristic creations?

Max Gadney, After the flood director, comments: “In this series, mechanical intelligence is discovered for the first time by a mystery character and recorded for posterity and science. This explorer records their wonder, alluding to a wider picture of and cast of players. It was a fantastic project to work on at After the flood, combining the passion for art and complex mechanics that underpins much of what we do.”

This series of the Survey is available in three prints – each presenting a record of the explorer’s experiences along with snatches of field notes. A larger book based on Robot Life Survey and its explorer will follow in 2017. This will visualise more robots, notes and thinking around this new world of physical, connected intelligence.

The voice of the explorer is provided by Lloyd Shepherd, author of historical thrillers The English Monster, The Poisoned Island and Savage Magic published by Simon and Schuster. Lloyd has spent many years studying the age of enlightenment, and with a background in the tech industry he is the best person to breathe life into the world of Robot Life Survey. The art itself is by Indonesia-based artist named Eunike Nugroho, who specialises in botanical and animal life illustrations and paintings.

Enjoy the “Explorer Notes” by Lloyd Shepherd below: “Of all the creatures I’d encountered on my voyages, this was the one that most disturbed me. It stepped silently through the trees, its queasily familiar legs quick-stepping through the snow, as it sought to self-correct its balance at each contact with the ground. On its back was an enormous hessian sack, tied to its body with rope, the property, no doubt, of some Siberian tribesman who had captured this thing and adapted its programming for his own banal ends. It would have come up to above my waist, had I not been sitting in a tree watching it pass, and it was the biggest single machine I had yet seen. But this is not what disturbed me about it. What gave me pause was the memory of Lovelace’s wolf-hound, a great grey beast of enormous gentleness which had plodded this changing Earth with the exact same care as this silent machine. The dog must have been long-dead by that time, but my heart softened at the memory of it, as I watched this machine make its considered way through those deep, silent, freezing woods.” The noise made by one of these tiny machines must be almost inaudible, but the little swarm we encountered down in the valley made an angry sound in its buzzing aggregate. I had seen plans for machines such as these in Lovelace’s study, and had marvelled at how the elegant lines had been squeezed and folded into such tiny mechanisms. Each was barely five centimetres in length, and they must be light indeed to hover in the air so effortlessly, though it is some time since anyone has caught one. Their yellow-and-silver sides reflected the harsh Afghan sun, and as they moved away from us their buzz mellowed, putting me in mind of English summer gardens, though no bee I ever saw cast a shadow such as these machines did on the orange rock, and no singular purpose guides a bee’s flight in the way it seemed to hold these little things in check, as they flew away from us, in inscrutable formation, for a destination at which I could only guess. There were too many of the little machines to count, but there may have been as many as a thousand. The herd moved like oil gliding down a steel ramp, slowly and with its only apparent purpose being adjacency, a need to hold itself together, to cohere into a shape that was a circle, then a triangle, then a square, a puddle of technology which could not make up its mind. Each of the little machines was five centimetres across, and moved on little feet which tapped on the concrete, making a sound like light rain. All each of them knew of the world was the location of its neighbours, and a simple task held in the code of no more than a dozen of them. So was this a single organism, a slime-mold made of plastic and silicon, its intention rippling across tiny invisible networks? Was each device’s awareness of its neighbours the beginnings of a kind of consciousness? And if Lovelace were standing with me now, watching these little machines ripple across the ground, would those machines detect a presence, and stop, and turn to their Creator? No answer came, and on the mechanistic puddle slid, aware only of itself. 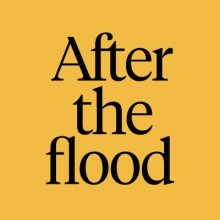 After the Flood Max Gadney founded design company After the Flood in 2012 after 10 years at the BBC where he led the design of the award winning BBC News website...

After the Flood Max Gadney founded design company After the Flood in 2012 after 10 years at the BBC where he led the design of the award winning BBC News website... 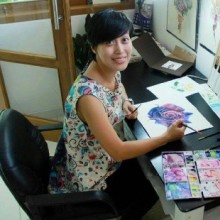 Eunike Nugroho is an illustrator specializing in botanical and animal life illustrations...

Eunike Nugroho is an illustrator specializing in botanical and animal life illustrations... 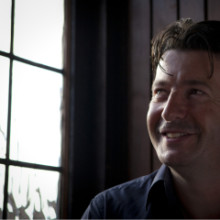 Lloyd Shepherd has worked as a trade journalist and a digital product manager for the likes of the Guardian, the BBC, Yahoo, Channel 4 and Financial Times Newsletters...

Lloyd Shepherd has worked as a trade journalist and a digital product manager for the likes of the Guardian, the BBC, Yahoo, Channel 4 and Financial Times Newsletters...