In today’s episode we take a close look at swarm robotics and its potential use in real-world applications with expert Alan Winfield, co-founder of the Bristol Robotics Lab in the UK. 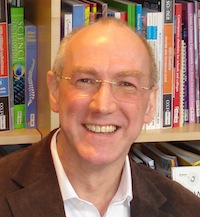 Alan Winfield is professor at the University of Bristol where he conducts research at the Bristol Robotics Lab. As a pioneer in the field of Swarm Robotics, he’s been looking at how large numbers of simple robots with local information can self-organize to achieve seemingly complex tasks. In such systems, inspired from social insects such as ants and termites, the intelligence of the group emerges from the actions of the individual robots.

Beyond simply showing that swarm systems can work in the lab, Winfield has been considering ways to make swarming a reality in applications. The main challenge is that it is typically difficult to prove that swarm systems will work, which is something desirable for real-world tasks. Furthermore, increasing the number of robots in the system also increases the probability of robot failures that might be disruptive to the swarm’s purpose. To overcome these challenges, he created a new field of research called “Swarm Engineering”.

Winfield is also a follower of the Open Science movement, meaning that he often publishes data, source code and project updates as science progresses. In his effort for transparency, Winfield is also Senior Media Fellow for the EPSRC which has gotten him blogging and tweeting about robotics.

Finally, we also discuss ethics with a focus on robots that make us believe they have feelings and the emphasis on ethical roboticists rather than ethical robots.

Latest News:
For videos of the robotic sailboat and sponge-wielding robot arm, have a look at the Robots Forum.