In this episode, Audrow Nash interviews Simone Schürle, advisor and co-founder of MagnebotiX, about using small robots to harvest crystals. These crystals can be used to infer atomic structure. An example application is in drug development to see if protein binding has occurred.

Below is a video that demonstrates the technology discussed in the interview. 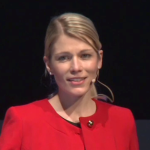 Simone graduated in 2009 from the Karlsruhe Institute of Technology (KIT), Germany, with a diploma (German equivalent to M.S.) in Industrial Engineering and Management. During her studies, she specialised in Micro/Nano Systems and Material Science and was enrolled in two international student projects abroad. She was researching at University of Canterbury, New Zealand, in the field of Biomedical Engineering and at the University of Kyoto, Japan, in the field of carbon nanotube based nano sensors which was sponsored by the Heinrich Hertz fellowship and a German state funding. She subsequently joined the Institute of Robotics and Intelligent Systems, directed by Prof. Brad Nelson, at the Swiss Federal Institute of Technology, where she focused on magnetic manipulation techniques for wireless microrobot control in biomedical applications. She was awarded with a Swiss National Foundation fellowship to pursue her postdoctoral studies and joined the Laboratory for Multiscale Regenerative Technologies at Massachusetts Institute of Technology (MIT) in June 2014. Simone is now interested in applying microrobotic control strategies in cancer treatment, specifically in locally enhancing nanoparticle transport.

This transcript has been edited for clarity.
Audrow: Welcome to the Robots Podcast. Can you introduce yourself to our listeners?

Simone: I’m Simone Schürle and my background is in magnetic manipulation of micro nanostructures. I’m a postdoc at MIT and co-founder for MagnebotiX , a start-up company. I work on calibration and performance measurements, optimising electromagnetic systems for micro-nano manipulation.

Audrow: What is the application of this technology?

Simone: You can use the system in an inverted microscope or an upright microscope – any tiny objects you want to maneuver with areas you need to interact with on a small scale, such as cells. You would use this technology if you want to understand how small structures move, or to explore completely new areas, like the low Reynolds number machine.

Dynamics change when moving from large to small. Let’s say you want to manoeuvre tiny objects in crystallography and extract crystals then blast them with x-rays to get the fractal structure so you can get to the atomic structure. These are extremely tiny objects. Here is where you can be guided from our technology in magnetic micro work.

Audrow: Before discussing crystallography I’d like to understand the system and its parts. Firstly, there’s a magnet microscope. Then induction coils … is that how you control a magnetic robot?

Simone: Correct! On the one hand to visualize the robot, we need vision feedback. So first you need a microscope. Then you’ll need a magnetic control system consisting of eight electro magnets arranged in a single hemisphere. We control the current from each of these eight coils.
Then you have a defined work space where you place your robot. It could be a dish, tank or a 96 well PCR plate, whatever.

Audrow: What does the robot look like? Can you give me an idea of its size?

If you have a magnetic helix and apply a rotating magnetic field it will propel forward. This concept is inspired by bacteria called flagella that have a helix and have rotational forward propulsion. You can apply this to magnetic helixes to get a cork screw-like motion. So this is one example.

Another example is a robot developed by a colleague in my former lab called “magmites.” These use a hammering motion – an impact driven motion – based on the oscillating magnetic field, where the magnets are connected through a spring and one hammers against the other to push itself forward. So this is one example of how you can build a surface walker: you just need a cylinder and to apply a rotating magnetic field and it can tumble over a surface.

Audrow: Can you tell me what is being done in crystallography? Why is this important?

Crystals in our body are composed of all kinds of protein arrangements, and one thing we would like to do target specific proteins for research. But first we need to understand the structure of the protein and then the interaction of a potential ligand to bind to that target protein. Then we extract and grow protein crystals externally, adding a ligand, send to a synchrotron, blast it with x-rays and collect the experiment fractal pattern data to figure out if binding occurred and what the structure looks like. This is important to track development.

Audrow: Tell me about your system and how it relates to crystallography.

Simone: In academia we are in the process right now of trying to target certain proteins, and the pharma industry is searching among these huge libraries of potential ligands to find ones that could bind to these proteins.

Audrow: What exactly is a ligand?

Simone: It’s an interaction, another molecule instructed to bind to the protein.

One thing you can do is to model this kind of interaction so that you can knock out potential candidates, and then you conduct the experiment to grow the crystals. Much has been automated: hundreds of crystals can be grown at the same time and they are manipulated by robotic arms to different stations. They’re very finicky because you have to maintain them at different temperatures, and they have to be shaken all the time.

After weeks of growing them, they’re still in this process chain before you can send them off to the synchrotron. Every two weeks most pharma companies book a full day slot where all their crystals will be analysed.
Until recently, one of the steps in this process – harvesting the crystal – has been manual. This step involves taking the crystals out of their growth solution, where they are sitting in little droplets. Previously, this has been done by highly trained physicists using a nanoloop underneath a microscope, trying to fish out crystals that are the size of the root of your hair. These crystals are extremely fragile as they contain up to 90% water; they break very easily, and they like to grow at cold temperatures, so people must work in cold rooms for hours to fish them out.

Clearly, this is an error-prone and unpleasant process. We saw the need for automation and clearly a micro-robot could do this finicky job. We designed a robot called the “rodbot”: it is essentially a polymer rod with soft magnetic posts in it. We can magnetize it in such a way that when you apply a rotational magnetic field to it, you can make it roll.

Audrow: How large are these robots?

Simone: The robot is about the size of the crystal; it’s 60 micrometre in width and up to 300 micrometre long.

Audrow: Can you give me an idea of scale?

Simone: Your hair is about 80 micrometres in width, so it’s about the width of your hair.

Audrow: Looking at the rodbots it looks like there are holes. Are those magnets?

Simone: These are the magnets.

Audrow: So there are several magnets placed along its length and it’s a rectangular prism?

Simone: Correct. We have these posts perpendicular to its length to get the magnetization direction perpendicular to its axis so it can roll on the surface in the way we needed exactly. So initially we thought we could just approach the crystal and push it. In reality, we don’t even touch it because of fluid dynamics due to its size. There’s a vortex generated as soon as we come close to the crystal.

Simone: Yes, and that lifts the crystal on top. We have a non-contact manipulation technique, which is very nice for these fragile crystals. They get trapped in this whirlpool.

Audrow: It rides on top of your rodbot because of the whirl of vortex? Where do you bring it?

Audrow: The rest of the process is automated?

Simone: Yes, our vision for the whole process to be integrated. You could have computer vision to identify your target crystal, automated path planning to approach the crystal, the rodbot to get the crystals, and a robot arm to remove it prior to cooling.

Audrow: From there you can analyse the crystals, check what has bonded, and then use that for drug development?

Audrow: How do you control the crystal? I know you’re using magnetic fields to move it. Is an operator sitting with a joy stick. You also mentioned computer vision, is it automated?

Simone: This is the ultimate goal of true automation: that you don’t need to have an operator anymore. There are already established computer vision algorithms to detect the crystal. It’s not an easy environment where they grow. However, we can improve environmental conditions and growth conditions.
We can identify the crystals and identify the rodbot, that’s easy. The difficulty is going under an object and finding the shortest path to it.

Audrow: The rodbots are single use micro-robots. Why are they only single use when the don’t come into contact with anything?

Simone: When the operator conducted this manually, the loop used to fish it out was a single use item. What we do is combine the single use item with the rodbot. When this crystal has been finished you have to go to a new drop and introduce a new loop anyway. That’s why the rodbot is single use.

However as this can be batch fabricated, the process of making these rodbots uses microsystems fabrication, and you can generate thousands of them at a time, so they are extremely cheap.

Audrow: So you sell the system for “moving” the rodbot? And you sell 100s or millions of rodbots, and those are used for the crystallography?

Simone: Correct. Crystallography suppliers sell the nylon loops that fish the crystals out, and they also loops that have been preloaded with a rodbot.

Audrow: What have been the major challenges to developing this technology? Or turning it into a product?

Simone: One thing you can ask is: why hasn’t this been automated yet? It’s a complex environment, and there’s no commercial solution available. There are different physical manipulation techniques that have been suggested, such as using robotic arms, but so far this environment is too complex to accomplish it that way.

Audrow: Why is that? Is it too small?

Simone: Because of the dexterity that’s required, as well as the size and fragility of the crystal. Classic robotics usually uses contact, but this can damage the crystal. For us the hurdle when you go so small is that you have to deal with capillary forces and other forces that makes things stick, and this can be a problem.

Audrow: If you could go back and give your 20-year-old self one thing, what would it be?

Simone: Thanks very much.

This transcript has been edited for clarity.