In August 2014 Google [x] announced that they had been secretly developing a drone delivery program to rival Amazon’s Prime Air. Called Project Wing, the system was based on a mechanically simple “tailsitter” design – a hybrid vehicle that takes off vertically like a multirotor but is also able to fly horizontally like a fixed-wing airplane. Following field tests, however, Google scrapped the design, saying that it was difficult to control and didn’t perform well in high winds. Since then, researchers at ETH Zurich have developed a new algorithm for robustly controlling a tailsitter flying machine in hover position. Using the algorithm, the tailsitter is able to recover from any orientation, including upside down. ETH has not yet demonstrated its algorithm in real-world conditions (e.g., high winds, GPS localization, different payload distributions). However, given the robustness of the solution shown in the video, perhaps Google should not dismiss the tailsitter design too quickly for its next design iteration.

A tailsitter provides hover capability by pointing the nose and thrust direction upwards. For fast forward flight, the vehicle tilts to a near-horizontal orientation, resulting in efficient lift production due to the conventional wing design. Compared to other fixed-wing, hover-capable aircraft such as tiltrotors and tiltwings, the major advantage of a tailsitter is its mechanical simplicity: no mechanism for changing the direction of the propulsion system has to be added, saving weight and increasing reliability. The propellers are driven by brushless Hacker A05-13S motors that are attached to the wings by 3D-printed mountings. While the vehicle is hovering, it is crucial that a large part of the flaps are within the propeller-induced airstream, in order to keep the flaps effective and the system highly maneuverable. The motors are controlled by ZTW Spider 12A ESCs, which run custom SimonK firmware that enables a fast response to thrust set point changes. Since the custom SimonK firmware is tuned for the fastest possible response, the motor controllers get quite hot and are therefore placed in the propeller airstream for cooling. Two radios are attached on the bottom side of the vehicle; a WiFly module for high-bandwidth telemetry, and a low-latency, frequency-hopping 2.4 GHz radio link that receives the control commands from the ground station. The total system latency including the motion capture system and the radio link is around 35 milliseconds. The flaps are actuated by MKS DS65K servos providing a fast response on flap angle changes. The flaps of the original frame are designed for fixed-wing forward flight and do not provide enough control authority for the hover flight regime. Therefore their area is enlarged by carbon fibre sheets. This increases the effectiveness of the flaps by a factor of four. The maximum flap deviation is 30 degrees. A Pixhawk PX4 Flight Management Unit (FMU) runs the onboard control loop that tracks the desired body rates using a rate gyroscope which is also provided by the FMU. Safety routines that switch off the actuators if the vehicle does not receive control commands anymore or if the battery voltage is too low are also implemented on the FMU.

The algorithm is presented in research paper “A Global Strategy for Tailsitter Hover Control”, submitted to International Symposium on Robotics Research (ISRR), 2015. 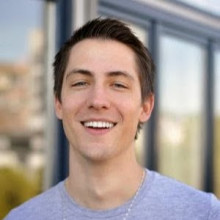 Robin Ritz is a doctoral candidate at ETH Zurich.

Robin Ritz is a doctoral candidate at ETH Zurich.