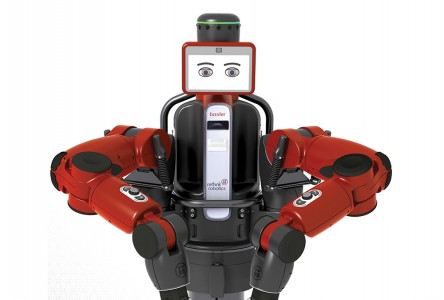 Many reporters, including myself, saw Baxter at Rethink’s headquarters in Boston in the past two months but were embargoed from writing about it until today, the launch date.

Looking at the stories – as they appear all over the web and in news print, three stand out, in my opinion, at the head of the class:

Markoff’s story uses everyday language and is directed toward a wide audience – the kind of multi-layered audience, multi-interests audience unique to The NY Times; the Spectrum article is for engineers and roboticists.

As an aside, Markoff’s article makes me ever more aware of the difference between a blogger/writer and a paid reporter from a reputable news source. John’s article made me wish I could write like him. I saw what he saw, got the same demo, played with the machine similarly, heard the same details. But I came away disappointed.

I could go on with the comparisons but, bottom line, John Markoff deserves to work for the NY Times because he reports things as they are. Opinion and spin are left to bloggers and PR people.

Markoff only writes a robotics story every month or so; Ackerman and Guizzo write every week or so. But every day there are hundreds of stories that need sifting to see whether they fall into News or Views and if News, whether the article is applicable for our readers as they do as we do: track the business of robotics.

I wrote this meandering message because of a quote I think appropriate about Baxter: George Carlin, the late comedian said: “Inside every cynical person, there is a disappointed idealist.”

Other stories about Baxter and Rethink Robotics from reliable sources: