In this episode, we speak with Ramon Pericet and Michal Dobrzynski from EPFL about their Curved Artificial Compound Eye (CurvACE) published in the Proceedings of the National Academy of Sciences. Inspired by the fly’s vision system, their sensor can enable a large range of applications that require motion detection using a small plug-and-play device. As shown in the video below, you could use these sensors to control small robots navigating an environment, even in the dark, or equip a small autonomous flying robot with limited payload. Other applications include home automation, surveillance, medical instruments, prosthetic devices, and smart clothing.

The artificial compound eye features a panoramic, hemispherical field of view with a resolution identical to that of the fruitfly in less than 1 mm thickness. Additionally, it can extract images 3 times faster than a fruitfly, and includes neuromorphic photoreceptors that allow motion perception in a wide range of environments from a sunny day to moon light. To build the sensors, the researchers align an array of microlenses, an array of photodetectors, and a flexible PCB that mechanically supports and electrically connects the ensemble.

This work is part of the European Project Curvace which brings together a total of 15 people from four partners in France, Germany and Switzerland. You can read our full coverage here. 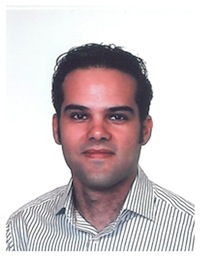 Ramon Pericet Camara is the scientific coordinator for the CurvACE project and a postdoctoral researcher at the Laboratory of Intelligent Systems at EPFL. His research interests are oriented towards bio-inspired robotics, soft robotics, and soft-condensed matter physics.

Ramon received a Masters degree in Physics in 2000 from the University of Granada (Spain) and a PhD in Multidisciplinary Research from the University of Geneva (Switzerland) in 2006. Subsequently, he was granted a fellowship for prospective researchers from the Swiss National Science Foundation to join the Max Planck Institute for Polymer Research in Mainz (Germany). 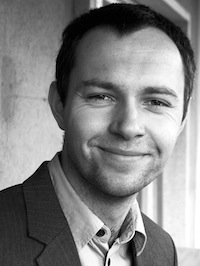 Michal Dobrzynski is a PhD student at the Laboratory of Intelligent Systems at EPFL. He obtained his master degree in Automatic Control and Robotics in 2006 from the Warsaw Technical University (Poland). He then joined the SGAR S.L. Company (Barcelona, Spain) as a Robot and PLC Software Engineer where his work focused on industrial robots and automatic lines programming and visualization. Next, in 2007, he joined a Numerical Method Laboratory at the University Politechnica of Bucharest (Romania) where he spent two years working in the FP6 “Early Stage Training 3″ project as a Researcher.