For the next week, Robohub will host a special focus on robots and jobs, featuring original articles from leading experts in the fields of robotics and automation. The goal of the series is to explore the shifting employment landscape as robots become more prevalent in the workplace, and we’ve got a great lineup! Effect of robots on jobs? Only time — and management teams — will tell

Although there is a surge in early stage personal and service robotics activity right now, it will take time to find out which technologies and companies will be the real winners, and only then will we learn the real affect on the overall jobs picture. I do believe, though, that we will see a new set of ROI’s emerge that will alter the jobs landscape, resulting in new jobs in a growing US-based robotics industry, as well as new job skills required to work synergistically with safe service robots.

Nate the Robot RH.4: Who wants those jobs?

To coincide with Robohub’s Jobs Focus, we asked our panelists to weigh in on the role that robots play in the wider economy, and whether this is a good thing or a bad thing for employment numbers. Here’s what they have to say:

These days it is hard to read an article about the future of robots that does not include a reference to jobs. As a pure roboticist, I object to the constant connection between the two, but as a concerned citizen I think it is a worthwhile discussion …

There is no doubt that robots, and automation in general, replace humans in the work-force: all productivity-enhancing tools, by definition, result in a decrease in the number of man-hours required to perform a given task …

Robots do kill jobs but they’re crappy jobs, so good riddance.  If you’ve ever had a job you were desperate for the money, but immediately regretted after you got it, then you know what I mean. …

There is no doubt that robots, and automation in general, replace humans in the work-force: all productivity-enhancing tools, by definition, result in a decrease in the number of man-hours required to perform a given task.

This Robotics By Invitation contribution is part of Robohub’s Jobs Focus.

There may be some regional effects that result in an immediate increase in jobs (for example, setting up a new manufacturing plant and hiring workers to maintain the machines), but the global effect is indisputable: overall, robots replace human workers.

What is also true, however, is that robots create jobs as well.  This is simply Economics 101: there is a redistribution of labor from low skilled jobs – what robots can do now, and the foreseeable future – to higher skilled jobs. An analogy from the North Carolina Department of Agriculture: “In 1790, 93% of the population of the United States was rural, most of them farmers. By 1990, only 200 years later, barely 2% of our population are farmers.”  What is also true is that there are many more software engineers now than there were in 1790; or mechanics; or physiotherapists; or professional athletes; or artists.

So the debate about robots replacing human workers is, for the most part, a tired and old one; just replace the word ‘robot’ with any productivity-enhancing tool or development. And as long as the process is gradual, one can reasonably argue that society benefits as a whole.

But the question does have merit, because human workers are at an artificial disadvantage relative to their robot counterparts, and the culprit is artificially low interest rates.  Large companies such as Procter and Gamble can issue 10 year corporate bonds that have astronomically low yields of 2.3%.  With money so cheap, productivity tools – such as robots – that would not be economically viable under normal interest rates and yields are now a bargain.  Why should a company ‘rent’ labor (a human worker) when it can ‘buy’ it (a robot)?  Have we not seen this storyline before?

Robots do kill jobs but they’re crappy jobs, so good riddance.  If you’ve ever had a job you were desperate for the money, but immediately regretted after you got it, then you know what I mean.

This Robotics By Invitation contribution is part of Robohub’s Jobs Focus.

The anxiety occurs when robots have anthropomorphic similarities that people wrongly associate with human ambition.  When a (semi) humanoid takes away the whole menial job that used to be done by a person, there’s an instinctive focus to blame the machine, not the corporation optimizing its bottom line.  Optimizing tasks to reduce costs is a good thing.  It’s just a shame we haven’t kept up with the social reforms needed so people who had those jobs before could find better jobs now.

So the short answer is robot-brained corporations kill jobs.  Robots are just the anthropomorphic patsies that get blamed.

Still, now I have to go and stare worriedly at my toaster.

Ability to do creative, non-routine work will be a must in the coming automation era. Is this realistic for most workers?

There can be no doubt that technological progress has resulted in a far more prosperous society. Technology has often disrupted entire industries and, in some cases — as with the mechanization of agriculture — destroyed millions of jobs. In the long run, however, the economy has always adjusted and new  jobs have been created, often in entirely new industries. Why then should we be concerned that the revolution in robotics and artificial intelligence will lead to sustained unemployment?

Just five years ago, anybody who spoke of technological unemployment was labeled a luddite, a techno-utopian, or just simply someone who doesn’t understand economics. Today things are very different – anybody from New York Times columnist Tom Friedman to CBS are jumping on the bandwagon.

Robots and the economy: Red herrings, or canaries in a coal mine?

Recent economic trends are perplexing. Corporate profits are up. Productivity is up. Jobs and pay for the average worker have crashed, and are recovering slower than in any other decade on record. Many explanations for this paradox center on the role of technology: with the help of rapidly-advancing technologies (particularly information technologies), workers can produce that much more in output with that much less in input.

Jobs isn’t the issue for robotics 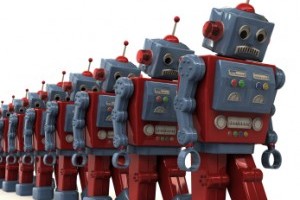 Well, not quite. According to Rodney Brooks, robotics has too much Steve Wozniak and not enough Steve Jobs. And perhaps that’s where the jobs part of a very full afternoon forum should have ended. Xconomy’s forum “Robots Remake the Workplace” featured a stellar line up of robotics companies, startups and investors who covered a wide range of views about where robotics industries were going. Vivek Wadhwa, VP of Academics and Innovation at Singularity University and Wade Roush, Xconomy Chief Correspondent and moderator of the sessions, tried hard to represent the recent negative view of robotic’s impact on jobs and the economy. But in the end, it was clear that robots vs. jobs was a far less compelling discussion than diving deeper into what sort of robotics businesses are taking shape and what issues they face.

Do industrial robots really have a positive impact on employment?

Do industrial robots really have a positive impact on employment? Of course they do and there are over 50 years of data proving that to be the case.

At the Xconomy Forum held in Palo Alto earlier this week, the focal topic was “Robots Remake the Workplace.” It was expected that the jobs issue would permeate the event. Do robots take away jobs? Instead, what was evident to all in the room was that all the speakers were in the new Service Robotics sector of the industry and they were all creating new jobs. It used to be that it didn’t matter how grueling the work was, so long as it was safe enough that a worker could get through the day uninjured by being careful. If the boss paid cash at the end of the day and didn’t ask too many questions, there’d be someone waiting to jump in the back of his pickup truck when he went out early in the morning to collect workers. The pay wasn’t great, of course, but it was better than what the workers could expect for equivalent work back where they’d come from, and if they were frugal they could save a bit and send some home or eventually bring their families to the U.S. Moreover, there really weren’t any serious consequences for employers who hired undocumented workers.