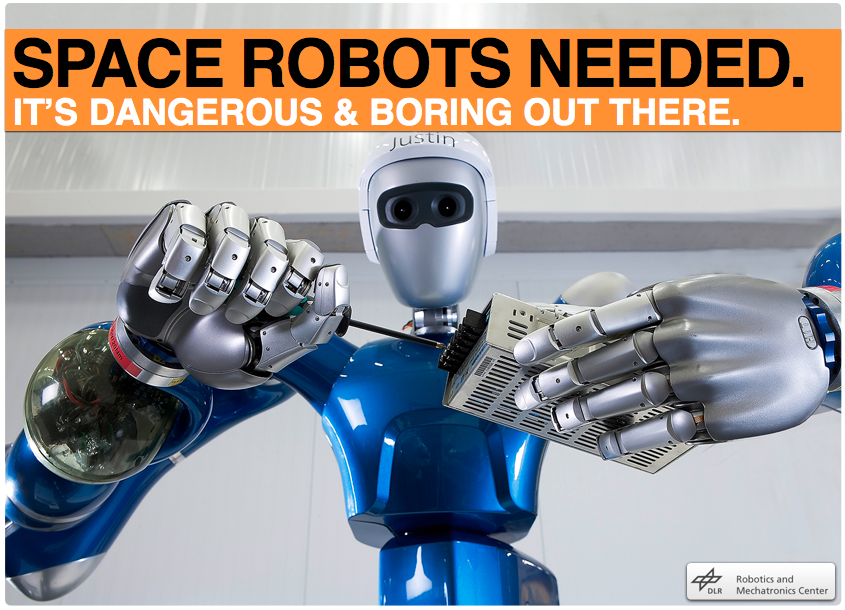 Astronauts: awesome, but only human
It’s cold out there beyond the blue. Full of radiation. Low on breathable air. Vacuous. It’s hard to keep machines and organic creatures functioning and/or alive. Space to-do lists are full of dangerous, fantastically boring, and super-precise stuff.

We technological mammals assess thusly:
“Robots. Robots should be doing this.“

Enter “Team Space Torso”
As covered by IEEE a few days ago, the DLR (das German Aerospace Center) released a new video detailing the ins & outs of their tele-operational haptic feedback-capable Justin space robot. It’s a smooth system, and eventually ground-based or orbiting operators will just strap on what look like two extra arms, plug in to an augmented reality interface, and go to work. Justin’s target missions are the kind of risky, tedious, and very precise tasks best undertaken by something human-shaped, but preferably remotely controlled. He’s not a new robot, but Justin’s skillset is growing (DLR video).

Now, meet the rest of the gang:

NASA’s Robonaut2 (full coverage), the first and only humanoid robot in space, has of late been focusing on the ferociously difficult but mundane tasks of button pushing and knob turning, but hey, WHO’S IN SPACE, HUH? Then you’ve got Russia’s elusive SAR-400, which probably exists, but seems to hide behind, ummm, an iron curtain? Rounding out the team is another German, AILA. The nobody-knows-why-it’s-feminized AILA is another DLR-funded project from a university robotics and A.I. lab with a 53-syllable name (here).

Why humanoid torso-bots?
Robotic tools have been up in space for decades, but they’ve basically been iterative improvements on the same multi-joint single-arm grabber/manipulator. NASA’s recent and successful Robotic Refueling Mission is an expansion of mission-capable space robots, but as more and more vital satellites age, collect damage, and/or run out of juice, and more and more humans and their stuff blast into orbit, simple arms and auto-refuelers aren’t going to cut it.

Eventually, tele-operable and semi-autonomous humanoids will become indispensable crew members, and the why of it breaks down like this: 1. space stations, spacecraft, internal and extravehicular maintenance terminals, these are all designed for human use and manipulation; 2. what’s the alternative, a creepy human-to-spider telepresence interface? and 3. humanoid space robots are cool and make fantastic marketing platforms.

A space humanoid, whether torso-only or legged (see: Robotnaut’s new legs), will keep astronauts safe, focused on tasks that machines can’t do, and decrease the likelihood of space craziness caused by astronauts attempting to hold a tiny pinwheel perfectly still next to an air vent for two hours – which, in fact, is slated to become one of Robonaut’s ISS jobs.

Make sciencey space torsos not MurderDeathKillBots
As one is often want to point out, rather than finding ways to creatively dismember and vaporize each other, it would be nice if we humans could focus on the lovely technologies of space travel, habitation, and exploration. Nations competing over who can make the most useful and sexy space humanoid is an admirable step, so let the Global Robot Space Torso Arms Race begin!